As in many other cities in Germany, rugby was also a very popular sport in Offenbach before World War II when Germany still ranked in the top four in Europe. Apart from BSC there were several rugby clubs chasing the "Lederei" TG Offenbach, Rowing Club Udine, Rowing Club Offenbacher and Rowing club Fechenheim. Founded in 1921 by Ludwig Renker (formerly Heidelberger RK) the rugby department at BSC soon became one of the strongest. 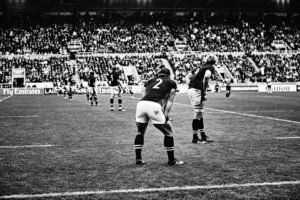 After the war rugby at BSC was re-launched in 1948, by Willi Kunz, Rainer Schmitt, Ludwig Backfisch and Heinrich Hense (from 1948 to 1953 Chairman of the BSC). In 1950 BSC played competition rugby for the first time. Our opponents were SC Neuenheim, RG Heidelberg, TV Pforzheim and SC 1880 Frankfurt. Another break occurred between 1952 and 1957, when a large number of players left the club. It was not until 1958 that BSC restarted for the third time due to the efforts of Heinrich Jaegy and Paul Hüls. The team played in the South League against TV 1860 Frankfurt, SC Neunheim, TV Pforzheim and Stuttgart. In 1961 an International match between Germany and Belgium took place on the BSC ground and in 1964 the cup final was also played on the beautiful ground of BSC Offenbach. Sadly things again went downhill with BSC in the mid-1960s but in 1967 we were successful again under Heinrich Jaegy - a renewed "fourth revival".

Soon enough great moments again came to BSC Rugby and in the golden era of the 70s and 80s BSC became South German Champions in 1975. In 1980 past DRV president, Ian Rawcliffe became coach. Under Ian’s fine leadership BSC was Hessenmeister in 82, 84 and 85, additionally in 83 and 85 the team reached the League Cup semi-finals but the leap into the next division was sadly unattainable, missing promotion to the Bundesliga on both occasions.

In 1989, Dominique Arnault took over as coach and the team qualified as Hessenmeister for the qualifying round of the Bundesliga Group South. From 1990 to 1994 with coaches Ian Stuart, Dominique Arnault and Wolfgang Bratschke BSC ran the gauntlet of rugby challenges: winning various qualifying rounds to the Bundesliga, various preliminary rounds of the Bundesliga and finally the qualification for the Second Bundesliga, it was one of our most successful years: The 94 team was coached by the Dominique Arnault and Wolfgang Bratschke duo and became League Cup winners, South German Cup winners and was promoted to the second Bundesliga. Due to the departure of some top performers to Heidelberg clubs, by 1997 the team were no longer able to hold the their place in the division, and retired voluntarily into the Regional league.

In 1998, Bruno Vrga was appointed as coach; -the fifth revival had begun. Successes came fast with the Croatian input and Vrga took the team to the first league within three years. In 2001 BSC reached the semi-finals of the DRV Cup. Despite some good games and the unanimous opinion that BSC enriched the First League, we unfortunately had to say goodbye to the long sort after German league standing after just one season. In the second division South, the team won the 2003 Championship title but lost the promotion game 22-14 to Germania List. A second chance for promotion was offered in the relegation match but that too was lost: this time in extra time to Berlin RC 32-46 after drawing 26-26 in regular time. In the season 2003/2004 under the South African Prof. Dr. med. Albert van Niekerk BSC was once again under attack. Bruno Vrga was no longer available as a trainer for reasons of time, but remained at BSC as a sporting director, and is today a valued and active sponsor. 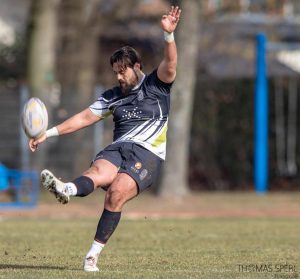 Since September 2018 our two men teams, get coached from the native South African and German national player Wynston Cameron-Dow. The 2018/19 season was one of the most successful in the club's history and the first men team went through the undefeated season in the Regionalleague and qualifies for promotion to the 2nd Bundesliga West for the 2019/20 season. The focus for a successful future for the BSC lies in planning and administration so that above all in the expansion and strengthening of the club, youth work holds the major emphasis for our long-term development. Worth mentioning here is the club’s old men’s team, the "Old Blackouts", who train regularly irregular, have already competed successfully at numerous international tournaments. Players from all eras since the 80s participate in this proud team, some of whom travel from abroad to join the activities as all hold the “never say die” Offenbach spirit, close to their hearts.

BSC Rugby is striving to become a visionary, cosmopolitan club, wiser for it’s flamboyant history and focused for today and the long term on “leading with the beautiful;” the beauty is in the youth and in the free expression of the individual that allows “heavens game”, where each man, women and child depends totally on the input and growth of each other to be played and enjoyed with passion.